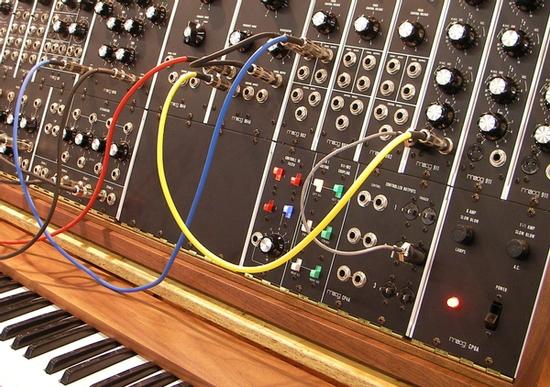 At Mux we’ve seen an increasing demand for access to the raw & enriched video QoS data processed by Mux Data. Moreover, it’s not sufficient for these exports to be available on a daily or even hourly basis; many customers want access to low-latency, real-time data streams with a latency of one minute or less, glass-to-glass. We’ve made this possible for Mux Data Enterprise customers through our real-time metric and event-stream exports.

Mux Data customers are building their own impressive applications that take action on the realtime streams, such as:

The number of uses is limited only by one’s imagination!

However, this presents an obvious challenge for us in managing the numerous streams destined for customer streaming systems.

Mux uses Apache Kafka as our internal streaming platform. Mux customers might use AWS Kinesis, Google Cloud PubSub, Kafka, or some other streaming service. When faced with the problem of bridging data in our Kafka clusters to numerous external streaming services, we chose to “stand on the shoulders of giants” and use battle-tested open-source software to power the streaming export system as much as possible.

The Kafka Connect project is part of the Apache Kafka ecosystem. To quote Confluent:

“Kafka Connect is a tool for scalably and reliably streaming data between Apache Kafka and other data systems. It makes it simple to quickly define connectors that move large data sets into and out of Kafka.”

Anyone looking to stream data between Kafka and other data systems should first look to Kafka Connect.

Kafka Connect can run in either a standalone or distributed mode.

The standalone mode uses a maximum of one server, and the connector configuration is not fault-tolerant. This should only be used for testing or development.

Most production deployments of Kafka Connect run in a distributed mode. In this mode, a Kafka Connect connector (analogous to a job), can run across multiple Kafka Connect instances that make up a cluster, allowing for horizontal scalability & fault-tolerance. 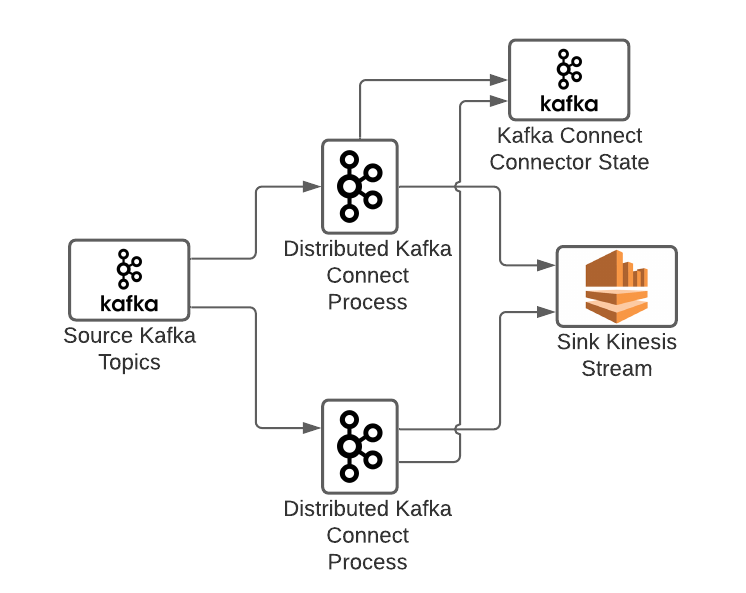 One of the best parts about Kafka Connect is that sources & sinks must only implement a single Kafka Connect Java Interface, making them extremely easy to write. This permits your source or sink to focus on reading or writing from the remote system. It's possible to write a source or sink for just about any system imaginable! All other concerns like offset management, consumer rebalancing, error-handling, and more are handled by Kafka Connect itself. Simply package your source/sink code in a JAR, include it on the Kafka Connect classpath, and you’re ready to reference it from a connector.

As an engineer working on streaming data systems, I’m certain I’ve written software equivalent to Kafka Connect several times during my career. It’s a tedious and error-prone process. Being able to delegate the majority of the work to a popular, well-supported open-source tool is a tremendous relief.

Mux uses Kafka Connect to manage the realtime event-stream exports to external streaming services. In the 9 months that we’ve been using Kafka Connect in production, it’s been extremely reliable, scalable, and easy to extend & customize.

Getting Started with Kafka Connect

Let’s walk through the process of deploying a Kafka Connect cluster on Kubernetes.

A lot of open-source software is designed to be run as-is, without modifications. I was surprised to learn that this does not apply to Kafka Connect. Expect to add connectors to Kafka Connect.

If you’re deploying Kafka Connect as a Docker container, then this involves adding image layers with source or sink JARs (Java Archives of compiled code) that provide the extra or customized functionality you need.

In our case, we add sink connectors for AWS Kinesis and Google Cloud PubSub. We also add a Prometheus exporter JAR that scrapes the Kafka Connect JMX metrics and exposes them as Prometheus metrics.

Here's a sample Dockerfile that pulls adds these dependencies to the Confluent Kafka Connect base-image:

We compile the JARs, place them in the same directory as the Dockerfile shown above, and run `docker build`. The resulting Docker image is pushed to a Docker image repository where it can be pulled and run.

At a minimum, you’ll need to change the Docker `image` URI to point at your new image, and change the `imagePullSecrets` name if you’re storing the image in a private repository.

Credentials for AWS and GCP are stored as Kubernetes secrets. The AWS credentials are set as environment variables on the container, which are automatically recognized and used by the AWS Kinesis sink for authentication. The GCP credentials are stored in a Kubernetes secret that is accessible from a file on the container filesystem; the `GOOGLE_APPLICATION_CREDENTIALS` environment variable is used by the GCP PubSub sink to determine the location of the file containing application credentials.

After deploying the Kafka Connect manifest to Kubernetes, you should see your Kafka Connect pod(s) running as part of a cluster. They’re not doing much at this point, but that’s fine!

This example shows how you can use IAM authentication and external-id’s to authenticate to a restricted role when accessing external resources, such as a Kinesis stream owned by another organization. It also shows how you can use the `kinesisEndpoint` key to use an alternate endpoint, which is a popular way of using a VPC endpoint to avoid having your Kinesis-writes egress through a NAT, which can become quite costly.

Make sure ‘CONNECT_REST_ADVERTISED_HOST_NAME’ is set

Failure to set this correctly will yield errors any time you try to modify the connector configurations. Other Kafka Connect community blog posts have addressed this specific issue, it’s a painful one.

Set the ‘errors.retry.timeout’ value on your sinks

Kafka Connect sinks can be configured to retry failed writes for a configurable duration with exponential backoff. However, the default behavior in Kafka Connect is to not retry writes on a worker task and immediately mark the worker task as failed. Once a task is failed, its source topic partition claims are reassigned to other tasks where they’ll be retried. This can lead to an imbalance of load across Kafka Connect pods. The only way to resolve this is by restarting the individual failed tasks.

Here's an example of an imbalance of network & CPU load across Kafka Connect instances due to task failures. Nothing is wrong, per se, but the uneven load leads to inefficiency that could later result in lag: 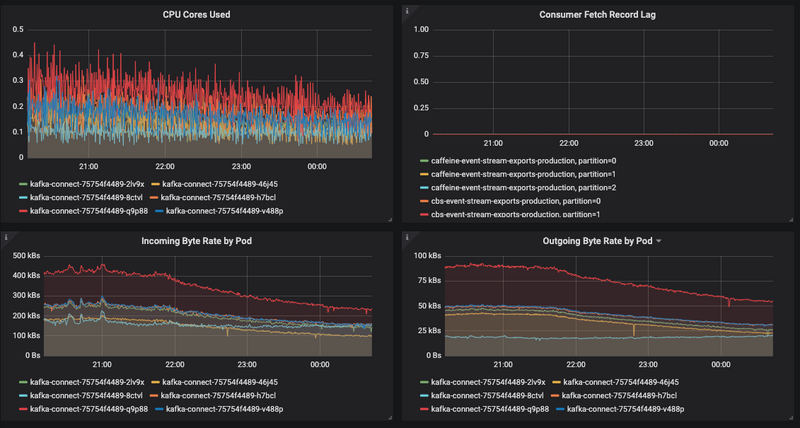 Ideally, the load should be even across all Kafka Connect instances: 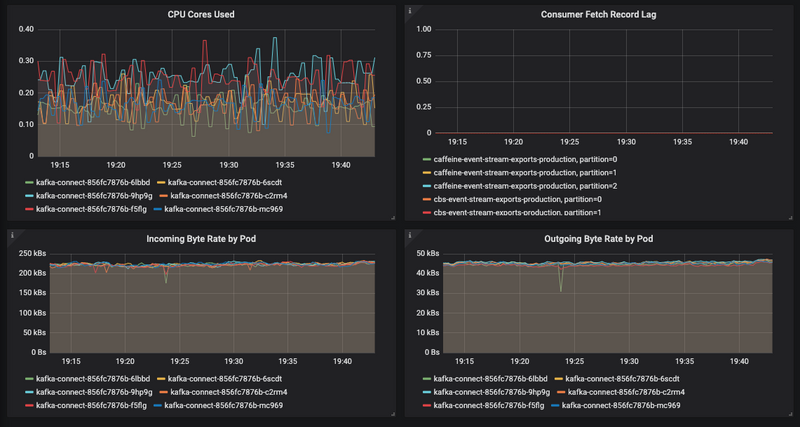 For this reason, it’s highly recommended that you set the ‘errors.retry.timeout’ setting on each sink. In the case of AWS Kinesis sinks, it’s common to get spurious write-failures that immediately succeed upon retry. Setting the ‘errors.retry.timeout’ ensures that you’ll get the benefit of a retry while keeping the workload balanced. You should also monitor task failures as an early indicator of load imbalances.

We try to autoscale all of the services we run at Mux, adding or removing servers based on some observed set of metrics. For instance, when CPU or memory utilization rises above some predetermined threshold, the cluster should add enough servers to bring the load back down below the threshold.

In our experience, Kafka Connect resource utilization has typically been constrained by CPU usage. Adding a server will cause a cluster to rebalance which, on its own, will temporarily drive up CPU utilization.

If the autoscaling service (e.g. Kubernetes Horizontal Pod Autoscaler, or HPA) is not configured to support a cooldown or delay, then the addition of servers could cause the HPA to think that even more servers are needed to deal with the temporary spike in CPU utilization. This can lead to massive overprovisioning and thrashing in response to a moderate increase in load. In our experience, this is a general problem for Kafka consumers that are subject to stop-the-world Kafka consumer rebalances.

One approach to this problem is to configure the autoscaler to use a stabilization-window during which no scaling decisions are made. Support for stabilization windows is present in the HPA in Kubernetes 1.18 or greater.

We use Grafana to visualize Prometheus metrics for all services at Mux. The JMX Exporter plugin that we bundle with Kafka Connect is responsible for exposing Kafka Connect JMX metrics for scraping with Prometheus. We’ve created a Grafana Dashboard to present significant metrics in a single-page dashboard.

Some of the useful metrics are:

We have alerts on the following metrics:

Kafka Connect has been an extremely useful tool for distributing Mux Data streams to customer stream-processing systems. The simplicity of deployment and the broad array of community-supported open-source integrations is unmatched!

If you’re a Mux Data Enterprise customer, we encourage you to contact us to set up a data stream that can be used to react to viewer activity and trends in realtime!

by Nidhi Kulkarni
A common feature for iOS applications is to be able to record, edit and upload user generated videos and then to display these videos in an infinitely scrolling feed. TikTok is one of the most popula ...
06/07/2021

by Dylan Jhaveri
This is a fun one. There appears to be a bug in Mobile Safari’s default HLS implementation when it comes to looping short-form videos. Here’s an example of some code that will play an HLS video. Note ...
04/20/2021

by Scott & Justin
Every February, millions of fans across America (and to some extent the world), tune into one of the biggest sporting events of the year. For the past three years, we’ve been watching too - monitorin ...