This is an interview with Jason Mattiace CTO and Co-founder at Cadenza.tv. Cadenza is a live video streaming platform for hosting concerts. Below is a couple screenshots of their first public concert from last Sunday. The band performing was The White Buffalo

The platform is complete with links to the artists’ Spotify, social media, merchandise store and a chance for the audience to engage with emoji reactions and Q&A. I was pleasantly surprised by how high-quality the production value was. It was clear that a lot of effort was put into shooting this in a professional studio with proper lighting, audio and multiple cameras. It sounded and looked great, it felt like the band was performing at a real show for a real audience.

At Mux, we love getting the opportunity to work with startups that are doing new and exciting products around video. If you are one of these companies like Cadenza we would love to talk! 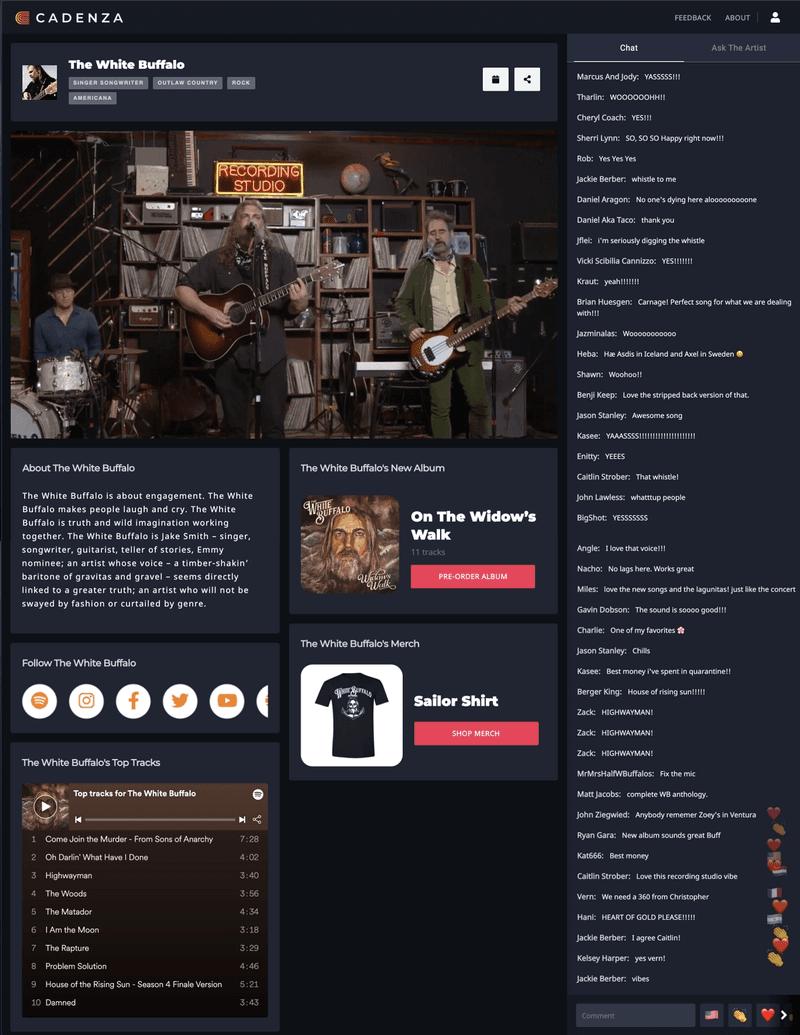 How would you describe Cadenza?

Jason: Cadenza.tv is bringing music fans closer to the artists they love with a new art to live streaming. We work hand-in-hand with each artist to tell an offstage story captured as a live event for fans to enjoy globally. Every production is of premium quality yet remains raw, uncut, and authentically catered to any genre of music.

How did Cadenza start, what is the founding story?

Jason: Stephen DeBrincat - CEO, Joe DeWulf - President & CCO, Myself - CTO. Stephen and Joe met freshman year while at The University of Michigan and quickly became best friends over the next 4 years. During college, they started a successful tutoring company together and decided to close the business to enter the workforce in enterprise tech sales positions. Joe moved to San Francisco within the same week as me where we met through mutual friends and became best friends over the next 4 years. Stephen and Joe had periodic conversations to talk about their entrepreneurial aspirations where the idea for Cadenza was finally born out of their passion for music. At first, Joe, knowing that I was happy with my current role as the Head of Engineering for Tia, reached out to me to get engineering advice on their new idea and asked for help in interviewing potential engineers for them. I gladly helped, and after about a week, I called Joe to tell him that I couldn't’ get his idea off of my mind and that I didn’t see a world where I didn’t join him and Stephen as the third co-founder. Thus the founding team was formed.

What are some challenges you ran into along the way?

Jason: We learned pretty quickly that the music industry is a different beast. We knew that we had an advantage by entering into this industry with a naive approach since the three of us founders had no prior experience in it. And even though we’ve received overwhelmingly positive responses form artists on our value prop, they are still skeptical of using new tech platforms that haven’t been proven before. And rightfully so; they have a brand to protect.

Additionally we learned that in this industry you cannot simply launch with an MVP. Your product has to be polished, has to be thoroughly tested, and has to be performant and reliable in order for an artist to be willing to use it. So we had to find creative ways of formulating product requirements and testing without seeing how real users in the wild were using our “MVPs”.

From the engineering side, one of the largest challenges that we have prepared for is the thundering herd problem where a live stream with a very popular artist could easily bring a couple million users to our site, all at the same time. Without the luxury of slowly scaling our infrastructure as we grow, we’ve had to make more expensive decisions now to be prepared for any artist that wants to do a live stream with us. This is probably the best part about not having to worry about our video streaming pipeline by using Mux.

How the launch when and how it has been received?

Jason: Overall the launch was a huge success for us. We’ve received overwhelmingly positive feedback from the band and their management team, the music fans that attended, and stakeholders that were a part of the process. We also gathered valuable feedback to help us improve for the next shows coming up soon.

The feedback from fans exceeded all our expectations:

“FANTASTIC!! I was skeptical about the stream quality but have to say overall it was superb, HD quality and the sound came through great. The White Buffalo and Jake were awesome as always!”

“Seen the show in Poland than in Norway (Oslo). I will never forget the feeling I had during the shows. With this show through Cadenza, I felt it all once again.”

“That was one amazing concert and group event. It was incredible to share the same experience with WB fans from all around the world. Cadenza did a really good job with hosting this. Really high quality video and audio!”

What’s next for Cadenza?

Jason: So much. We have aspirations of becoming the go-to brand amongst music artists for premium live streamed content, and we’re just getting started. In the near term, we’re going to be focused on refining our craft until we’re ready to scale our capacity for the number of shows we host on a weekly basis.

How did you find Mux and how are you using Mux?

Jason: Matt McClure and I played ice hockey together in SF which is how I first heard about Mux. I was able to follow Mux’s journey over the past couple years through Matt. We’re using Mux’s live streaming API to power live streams and create recordings of concerts and we’re also using Mux Data to monitor playback experience, especially the real time dashboard to monitor live shows.

Why did you choose Mux?

Jason: While I had many years of engineering and product development experience, I had zero prior experience with video tech, which has one of the steepest learning curves of any software technology that I’ve encountered. In order to start a new live streaming company and product from scratch, I had to focus as much time as possible on building our product, not my own streaming pipeline. In fact, I was able to get my first working prototype built on a flight from New York to San Francisco where I was streaming my webcam to my video player which convinced me that this was going to be the right solution for us.

Thanks for reading, you can learn more about cadenza at cadenza.tv and view the recordings from last Sunday's concert of The White Buffalo.

If you’re interested in doing live streaming (or anything else with video) get in touch with us at Mux! We love working with early stage startups like Cadenza that are building new and exciting video platforms.

by Matthew & Dylan
DatoCMS recently announced a seamless Mux integration into their headless CMS . Matt got a chance to ask DatoCMS CEO, Stefano Verna, some questions to learn more about the company and their thoughts ...
03/26/2019

by Bonnie Pecevich
Conference calling has come a long way. We all remember a time when you had a beep announce your presence and tolerated awkward pauses or interruptions throughout the conversation due to a lack of vi ...
12/13/2018

TMG improves startup time by over 35% with Mux Data

by Bonnie Pecevich
Company Telegraaf Media Groep N.V. (TMG) is one of the largest media companies in the Netherlands. With various distribution channels, including newspaper and digital platforms, they bring news, spor ...