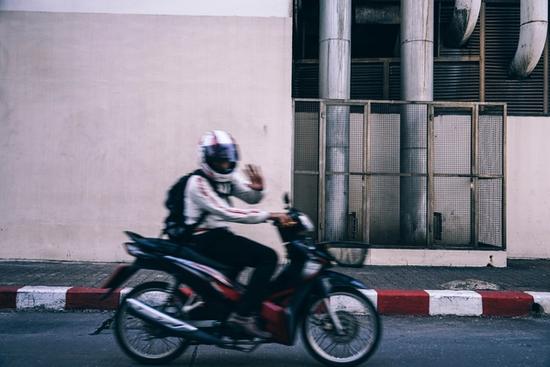 How we improved Tensorflow Serving performance by over 70%

How we improved Tensorflow Serving performance by over 70%

Tensorflow has grown to be the de facto ML platform, popular within both industry and research. The demand and support for Tensorflow has contributed to host of OSS libraries, tools and frameworks around training and serving ML models. The Tensorflow Serving is a project built to focus on the inference aspect for serving ML models in a distributed, production environment.

Mux uses Tensorflow Serving in several parts of its infrastructure, and we’ve previously discussed using Tensorflow Serving to power our per-title-encoding feature. Today, we’ll focus on techniques that improve latency by optimizing both the prediction server and client. Model predictions are usually “online” operations (on critical application request path), thus our primary optimization objectives are to handle high volumes of requests with as low latency as possible.

First let’s do a quick overview of Tensorflow Serving.

What is Tensorflow Serving?

Tensorflow Serving provides a flexible server architecture designed to deploy and serve ML models. Once a model is trained and ready to be used for prediction, Tensorflow Serving requires the model to be exported to a Servable compatible format.

A Servable is the central abstraction that wraps Tensorflow objects. For example, a model could be represented as one or more Servables. Thus, Servables are the underlying objects that client uses to perform computation such as inference. The size of Servable matters, as smaller models use less memory, less storage, and will have faster load time. Servables expect models to be in SavedModel format for loading and serving with the Predict API. 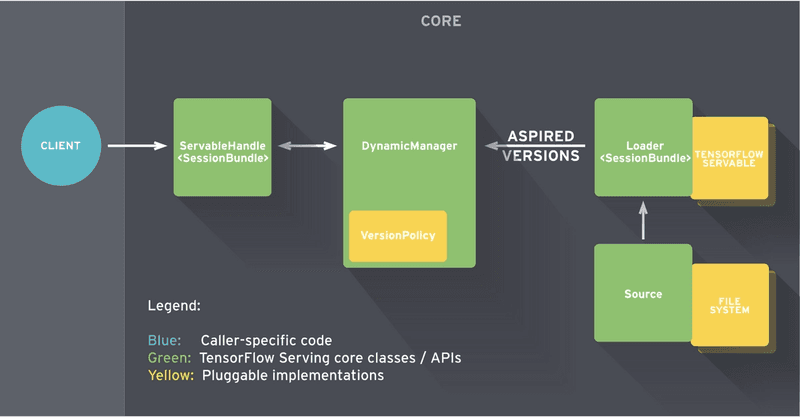 Tensorflow Serving puts together the core serving components to build a gRPC/HTTP server that can serve multiple ML models (or multiple versions), provide monitoring components, and a configurable architecture.

Lets get a base-line prediction performance latency metric with the standard Tensorflow Serving (no CPU optimizations).

When a model is trained using Tensorflow, the output can be saved as variable checkpoints (files on disk). Inference can be run directly by restoring model checkpoints or on its converted frozen graph (binary).

Tensorflow also provides a host of official and research models as starting point for experiments, research or production use.

As an example, we will use the deep residual network (ResNet) model that can be used to classify ImageNet’s dataset of 1000 classes. Download the pre-trainedResNet-50 v2 model, specifically the channels_last (NHWC) convolution SavedModel, which is generally better for CPUs.

Copy the RestNet model directory in the following structure:

Tensorflow Serving expects models to be in numerically ordered directory structure to manage model versioning. In this case, the directory 1/ corresponds to model version 1, which contains the model architecture saved_model.pb along with snapshot of the model weights (variables).

The following command spins up a Tensorflow Serving model server in docker container. In order to load the SavedModel, the model’s host directory needs to be mounted into the expected container directory.

Inspecting the container logs show that the ModelServer is running and ready to serve inference requests for resnet model on gRPC and HTTP endpoints:

Tensorflow Serving defines the API services schema as protocol buffers (protobufs). The gRPC client implementations for the prediction API is packaged as tensorflow_serving.apis python package. We will also need the tensorflow python package for utility functionalities.

The output of running the client with an input JPEG image is shown below:

The output Tensor has the prediction result as an integer value and probabilities of features.

For a single request, this kind of prediction latency is unacceptable. However, this is not totally unexpected; the default Tensorflow Serving binary targets the broadest range of hardware to cover most use cases. You may have noticed from the standard Tensorflow Serving container logs:

This is an indication of Tensorflow Serving binary running on an incompatible CPU platform that it was not optimized for.

According to Tensorflow documentation, it is recommended to compile Tensorflow from source with all the optimizations available for the CPU of the host platform the binary will run on. The Tensorflow build options expose flags to enable building for platform-specific CPU instruction sets:

Clone Tensorflow Serving pinned to specific version. In this case, we’ll be using 1.13 (latest as of this publishing this post):

If memory is a constraint, limit the consumption of the memory intensive build process with --local_resources=2048,.5,1.0 flag. See Tensorflow Serving with Docker and Bazel docs as resources on such build flags.

Build the serving image with development image as base:

The default for both options are set to a value of 0. This means, the system picks an appropriate number, which most often entails one thread per CPU core available. However, this can be manually controlled for multi-core CPU parallelism.

Next, start the serving container similarly to before, this time with the docker image built from source and with Tensorflow specific CPU optimization flags:

The container logs should not show CPU guard warnings anymore. Without changing any code, running the same prediction request drops the prediction latency by ~35.8%:

Can we do better? Server side has been optimized for its CPU platform but a prediction latency over 1s still seems too high.

It just so happens that there is a large latency cost to loading the tensorflow_serving and tensorflow libraries. Each call to tf.contrib.util.make_tensor_proto also adds an un-necessary latency overhead as well.

“Hold up”, you might be thinking. “Don’t I need the Tensorflow Python packages to actually make prediction requests to Tensorflow Server?”

The simple answer is no, we don’t actually need the tensorflow or tensorflow_serving packages to make prediction requests.

As noted previously, Tensorflow prediction APIs are defined as protobufs. Hence, the two external dependencies can be replaced by generating the necessary tensorflow and tensorflow_serving protobuf python stubs. This avoids the need the pull in the entire (heavy) Tensorflow library on the client itself.

To start with, get rid of tensorflow and tensorflow_serving dependencies and add grpcio-tools package.

Clone the tensorflow/tensorflow and tensorflow/serving repositories and copy the following protobuf files into the client project:

Copying the above protobuf files into a protos/ directory and preserving the original paths:

Now the entire tensorflow_serving module can be removed:

The Tensorflow library is imported in order to use the helper function make_tensor_proto, which is used for wrapping a python/numpy object as TensorProto object.

Thus, we can replace the following dependency and code snippet:

with protobuf imports and building the TensorProto object:

The following chart shows latency of a prediction request against standard, optimized Tensorflow serving and client over 10 runs: 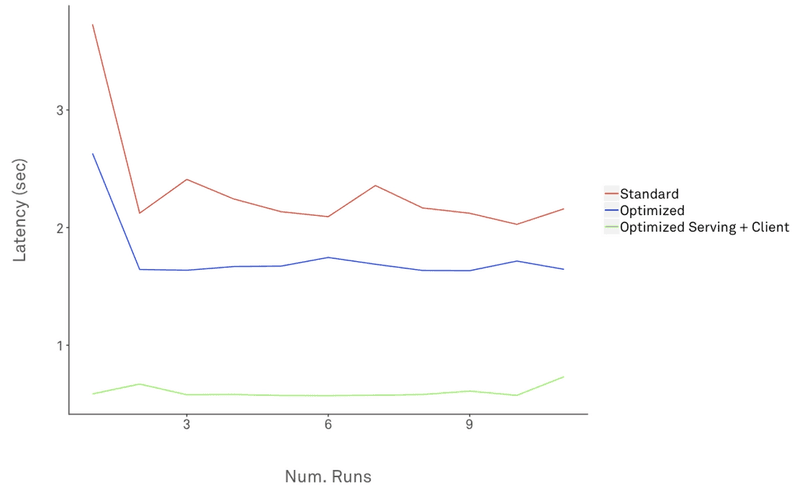 The average latency dropped from standard Tensorflow Serving to optimized version by ~70.4%.

Tensorflow Serving can also be configured for high throughput processing. Optimizing for throughput is usually done for "offline" batch processing where tight latency bounds are not a strict requirement.

Server-side batching is supported out of the box by Tensorflow Serving as mentioned in docs here.

The trade-offs between latency and throughput are governed by the batching parameters supported. Tensorflow Serving batching works best to unlock the high throughput promised by hardware accelerators.

Upon reaching full batch on server-side, inference requests are merged internally into a single large request (tensor) and a Tensorflow Session is run on the merged request. Running a batch of requests on a single Session is where CPU/GPU parallelism can really be leveraged.

Batching on the client-side is grouping multiple inputs together to make a single request.

Since the ResNet model expects input in NHWC format (first dimension being the number of inputs), we can aggregate multiple input images into a single RPC request:

For a batch of N images, the output Tensor in the response would have prediction results for the same number of inputs in request batch, in this case N = 2:

A few words on GPUs.

For training, parallelization can be exploited by GPUs more intuitively, since building deep neural networks requires massive calculations to arrive at optimal solution.

However, this is not always the case for inference. Many times, CNN's will get inference be sped-up when graph execution steps are placed on GPU devices. However, Picking hardware that optimizes the price-performance sweet spot requires rigorous testing, in-depth technical and cost analysis. Hardware accelerated parallelization are more valuable for "offline" inference batch processing (massive volumes).

To experience ML-driven video streaming quality settings, try out Mux Video. Or if you’re interested in working on projects like this, check out our openings!

Photo by Fancycrave on Unsplash

by Scott & Justin
Every February, millions of fans across America (and to some extent the world), tune into one of the biggest sporting events of the year. For the past three years, we’ve been watching too - monitorin ...
03/02/2020

How to Host Your Own Online Conference

by Dylan Jhaveri
Online conferences seem to have gained in popularity the past year. We’re seeing more and more folks reach out with questions around best practices and how to pull off their remote conference. Someti ...
07/14/2021

by Drew Rodman
Mux Video makes it easy to build video-centric applications with global audiences that expect a seamless viewing experience regardless of device or location. In order to help accomplish this lofty go ...